Landlocked in East Africa, bordered to the east by Kenya, to the north by South Sudan

‘The pearl of Africa’, as Uganda is fondly known, stems from it’s rich diversity of culture and wildlife. With the extreme diversity in vegetation, from dry Savannah to thick tropical forests, this country offers the widest variety of wildlife.

It is a once in a lifetime experience for any traveler, as you’ll get to be up close with these amazing creatures. Tour groups are kept small, to keep the experience intimate.

Uganda is home to the local Batwa Tribe of Bwindi, which is one of the Pygmy tribes, who are known to be ‘keepers of the forest’. Enjoy an enriching experience learning about their culture, and traditions of these hunter-gatherers.

There is a rich diversity of ecosystems throughout the country. You won’t want to miss our on a tour along any of the many beautiful crystal clear lakes and scenic rivers. One of these is Africa’s largest lake, Lake Victoria. There are a range of National Parks and sanctuaries to visit that the Big 5 call home, and they offer great safari opportunities and luxury accommodation options.

Another animal sightings not to miss are the troops of gorillas and chimpanzees, facilitated by numerous trekking options. Other Primates such as Black and White Colobus, Grey Cheeked Mangabey, and Red Tailed Monkeys, can also be seen. So why not spend some time gorilla trekking through Bwindi Impenetrable National Park and experience the majesty of these amazing animals. 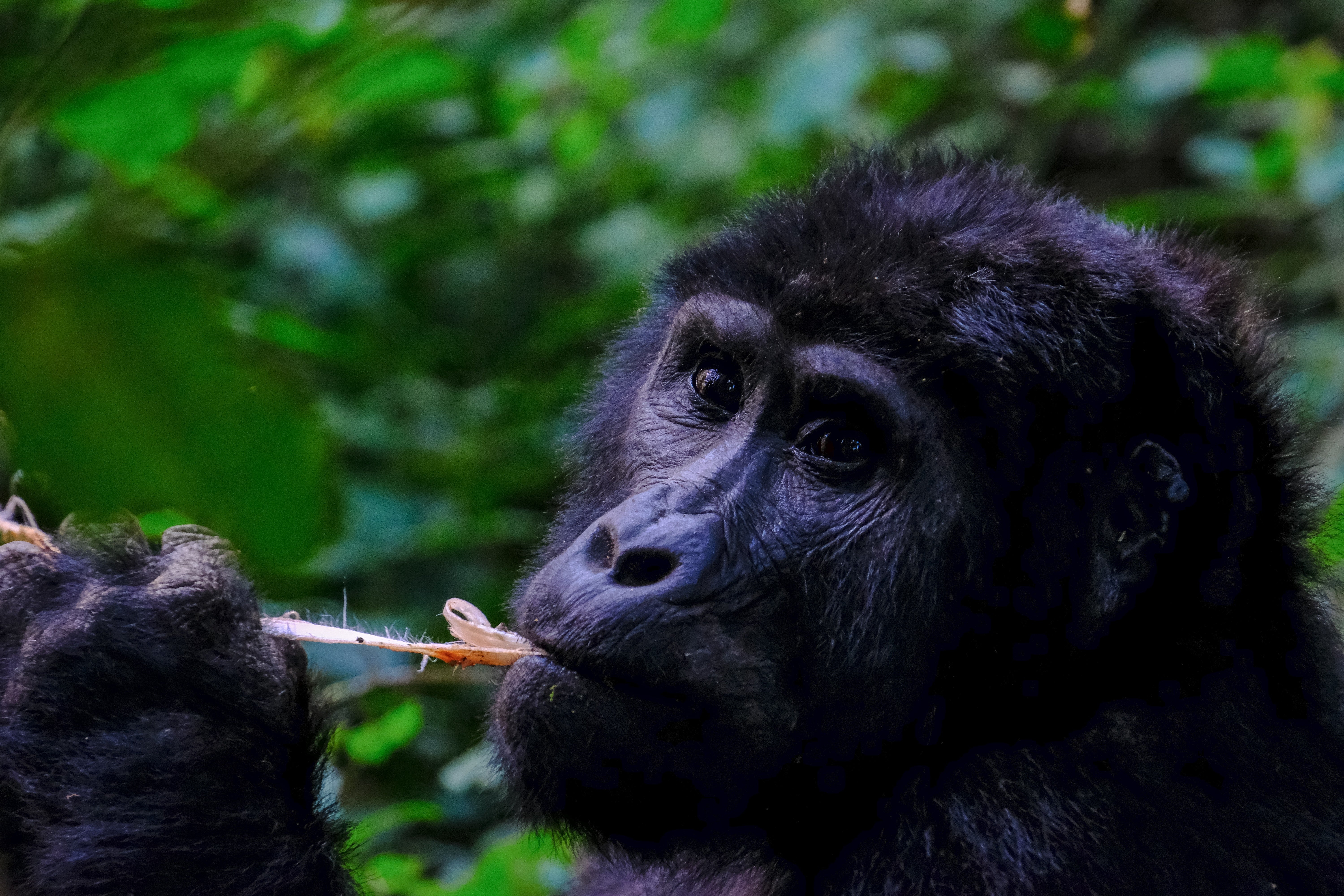 FIND OUT MORE ABOUT OUR UGANDA TOURS

Uganda, the Jewel of Africa is situated in the north of Tanzania, west of Africa’s largest Lake, Lake Victoria. The scenic country is not only a wildlife destination, but also home of one the pygmy tribes, know as the Batwa Pygmies. You will enjoy the opportunity to learn their fascinating culture and interact with them in their traditional village. Hike, with a guide into the thick forests of Bwindi National Park where you will track and interact with the largest primates on earth, the Mountain Gorillas, following the legacy of Dian Fossey.

Besides Gorillas you may enjoy the Kibale National park which is home to Chimpanzee’s and is a beautiful thick rain forest . Uganda is really a beautiful country covered in forests, savannahs and crystal clear lakes. Besides this, it is also the source of the Worlds longest river, the nile on which you can enjoy a boat cruise or for the adventuress, a white river rafting expedition.

Simply send us your details, and we’ll get back to you soon with our latest Uganda Tour Packages! 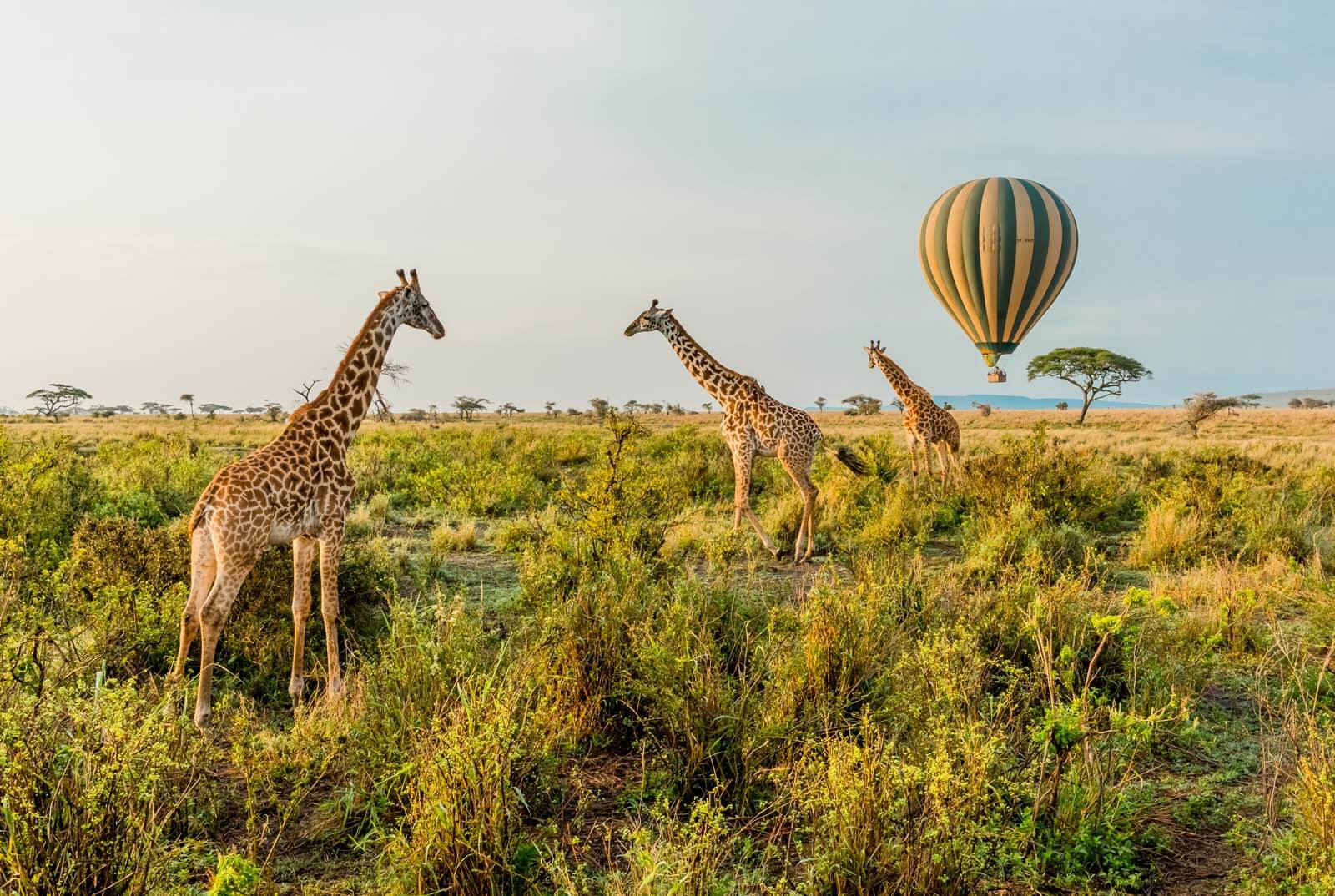 Tanzania, is home to the iconic migration of Wildebeest where hundreds of thousands of Wildebeest cross the great African plains in search for better grazing and water.

In the Northern parts of Tanzania, sits Mounts Kilimanjaro, the highest peak in Africa, which offers the more adventurous traveler the opportunity to take on a once in a lifetime trek up this incredible mountain.

Borders Kenya and Uganda to the north

Close your eyes; imagine the beating of a thousands hooves, the echoing roar of lion and the beautiful sight of the vast open plains of Africa.

Tanzania is one of the most sought after safari destinations in the Eastern Africa region, and for good reason.

Tanzania offers world-class safari lodges along with some of the most incredible safari experiences in Africa. For the adventure seeker, one can opt in to the tented safari options allowing you to be that much closer to the African wildlife.

In terms of offerings, Tanzania has a vast variety to explore. From a rich diversity of cultures such as the famous Masai, to Ngorongoro Crater – the largest crater on earth to witnessing some of the largest flamingo populations across the abundance of lakes.

Be sure to stop at some roadside vendors and the Mto wa Mbu cultural center.  Last, but not least, add a trip to Serengeti Hippo Pool to see some happy hippos wallow in the mud.

FIND OUT MORE ABOUT OUR TANZANIA TOURS

Book A Tour of Tanzania!

Safari, thundering hooves of animals and the roar of lions which climb trees, welcome to Tanzania, the home of one of the tallest tribes in Africa, the maasai. Travel and explore the many game reserves, such as the Ngorogoro conservancy and the Serengeti to name just a few. This region in Africa with its two rains seasons is famous for the largest mammal migration on earth, the wildebeest migration. However the regions offers good game viewing throughout the year.

movement from Northern Serengeti to the Southern Serengeti. Also the time for calving so lots of babies around which in turn is followed by predators.

Grazing is good in the Southern Serengeti, and Ngorogoro crater area, thus herds remain in the south.

heards are still in the south yet grasses are all at there end. Last odd the calves are born and herds start gathering together in preparation to start moving.

This is the time to start seeing the start of the migration, the wildebeest start moving toward the North for better grazing. Many are in the central  and Western Serengeti already.

migration is in full swing, heards  kilometers wide are on the go. This is one awesome experience as the wildebeest rush into the Central and western plains of the Serengeti.

herds are gathering their strength for the toughest part of the migration.

this brings in the toughest part of the wildebeest journey, the river crossing. Herds have reached the far western reaches, the Grumeti Reserve. This is where the cross crocodile infested waters.

They wildebeest, those which have survived the crocodiles enjoy the grasses in the the northern Serengeti. Some begin to cross back into the masai Mara game reserve in Kenya.

brings in the a time where the large herds split up into smaller groups.

herds enjoying the grasses of the northern Serengeti and the Mara.

the short rains have started and the herds start moving back into the serengeti as the grasses in the Mara are depleted.

Simply send us your details, and we’ll get back to you soon with our latest Tanzania Tour Packages! 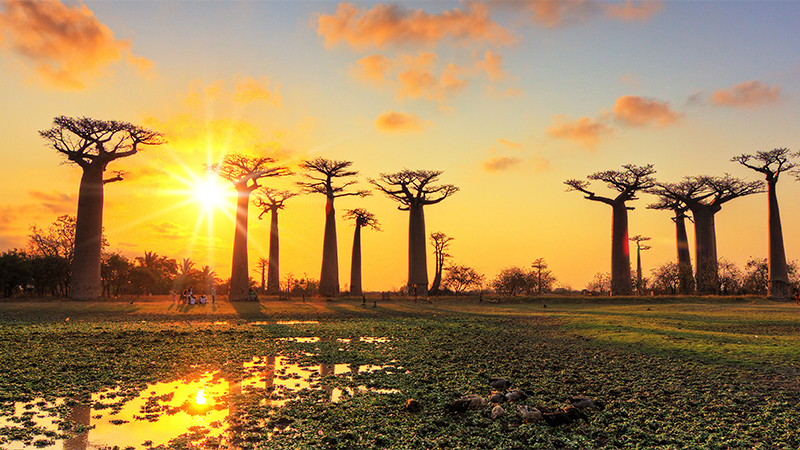 The South Antananarivo to Tulear (9 Days)

Madagascar seen from above (5 Days )

Unusual Getaway to the South (6 Days)

Panoramas of the South West (7 Days)

Between land & sea in Antsanitia (7 Days)

FIND OUT MORE ABOUT OUR MADAGASCAR TOURS

An island left behind by evolution, this beautiful Island with leave you dumb struck. Madagascar is home to a wide variety of wildlife such as lemurs. Lemurs are found now where else in the wild on earth. Besides the wildlife, hike through the lush rain forest or catch the rays of the sun as you explore many beautiful beaches the island has to offer.

For the adventuress, there are wonderful reefs to explore in scuba or snorkel gear. Enjoy mingling with the locals as you explore villages. Madagascar is home of the largest diversity of baobab trees. SO, if it is a island holiday you dreaming of, with a warm tropic climate and beautiful beaches you are after, added to this lush green tropical forests, with beautiful waterfalls, where you can see up to 90% unique to this island animals, look no further. Madagascar is the place for you.

Simply send us your details, and we’ll get back to you soon with our latest Tours of Madagascar!

World’s 4th largest island off the East cost of Africa

Due to the unique isolation of Madagascar to the rest of the world, the majority of the wildlife it homes, including half of it’s bird population, as well as most of its plant species, don’t exist anywhere else is the world!

The country’s one-of-a-kind ecology has led some to refer to Madagascar as the “eighth continent”, and is known as a biodiversity hotspot.

Be Prepared to see things you won’t anywhere else. All that you see, hear and touch is a unique experience here. The fauna, the hills, and the abundance of untouched nature is something to behold.

You could holiday here time and time again, and never have the same experience twice. Some unique experiences include seeing lemurs dancing while taking a safari, snorkeling along a colourful cost of sea life, watching the sun set over the beautiful beaches along the coast, and enjoying the sounds. Or treat yourself to an exclusive overnight stay at one of Madagascar’s private islands, Nosy Iranja and Nosy Mitsio (Tsarabanjina).

Watch hump-backed whales migrate over August and September when you visit Sainte Marie Island. A Madagascan holiday is the epitome of the ‘tropical beach getaway’

Zanzibar lies off the coast of the mainland of Tanzania, in East Africa

Zanzibar consists of many small islands and two large ones: Unguja, and Pemba Island. These beautiful and remote tropical paradise Islands are where the art of relaxation has been perfected.

Zanzibar is a great place to unwind whilst sipping cocktails on one of the many pristine beaches, soaking up the African sun.

Known for its spicy East African flavored foods, and its picture-perfect peaceful setting, Zanzibar is a destination for a family holiday or a romantic honeymoon getaway. Visit the Darajani Market to experience the local culture and cuisine all in one magical place!

The capital, Stone Town, is a popular destination and also happens to be the birth town of Queen’s Freddie Mercury. Zanzibar is also home to the Colobus Monkey, a rare species of primate, which is critically endangered, making it a special site if spotted.

Other local attractions include, The House of Wonders (Beit-el-Ajaib) museum which explores that rich history that Zanzibar has to offer. Pemba Island remains untouched off the coast of Zanzibar, and offers travelers the perfect beach escape.

Dwyka Travel will arrange an unforgettable  Zanzibar experience, covering everything from A to Z to ensure that your family holiday, romantic getaway or adventurous exploration is an exceptional, one-of-a-kind experience. 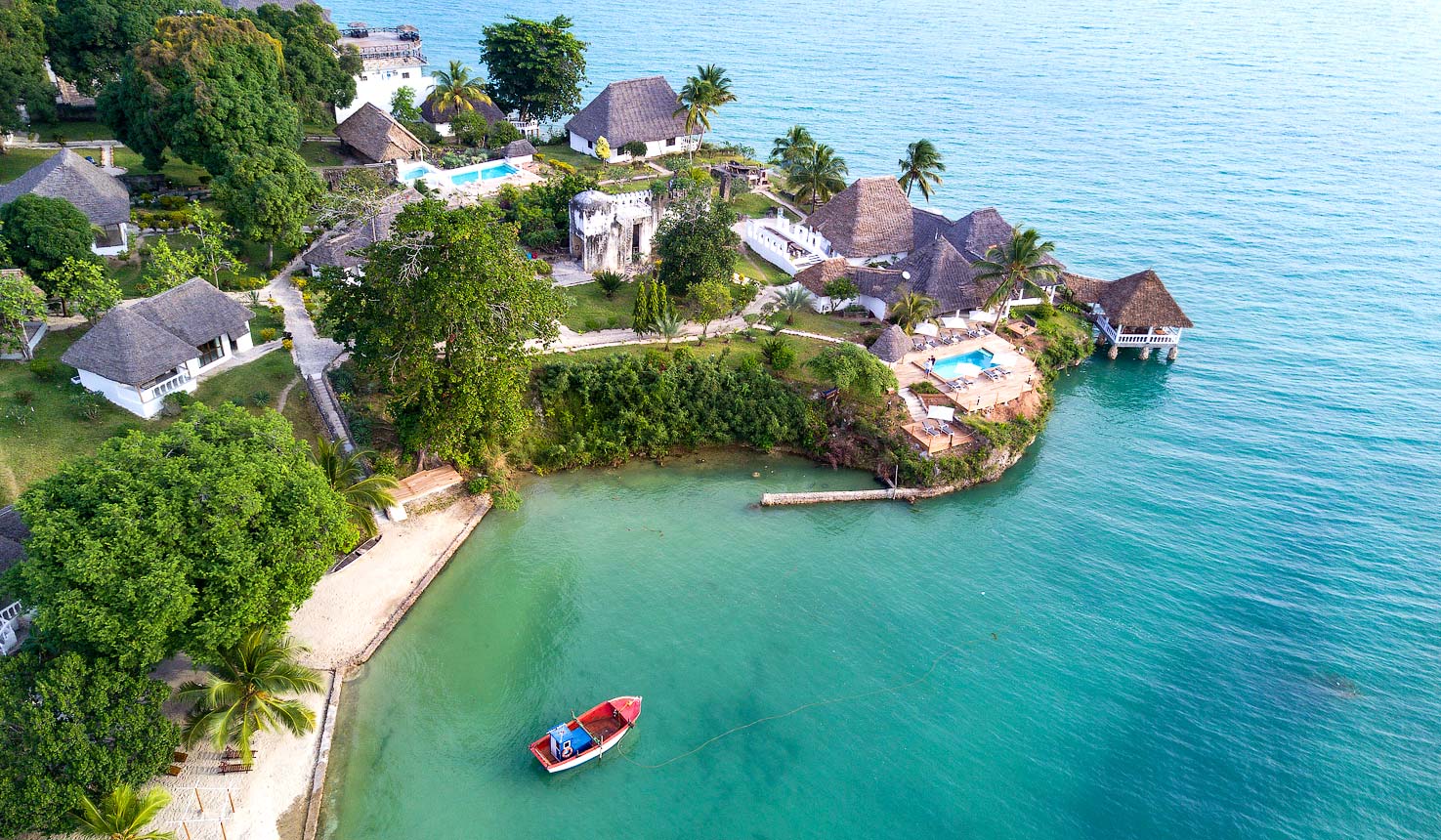 FIND OUT MORE ABOUT OUR ZANZIBAR TOURS

Book A Tour of Zanzibar!

Welcome to island paradise, one of the most beautiful islands on the African coastline and often referred to as the Spice Island. Enjoy this tropical paradise with its beautiful beaches and resorts. Explore the historical Capital, Stone Town.

The resorts offer a variety of water sport. With ocean temperature exceeding 25 deg Celsius who could resist the temptation of playing in the tropical water. Zanzibar is also a ideal wedding destination. It has a colorful history with Arabic, Indian, African, Persian and European influences, with a blend of architecture. In the country side farming of various spices such as cloves and lemon grass is practices extensively.

Simply send us your details, and we’ll get back to you soon with our latest Zanzibar Tour Packages!